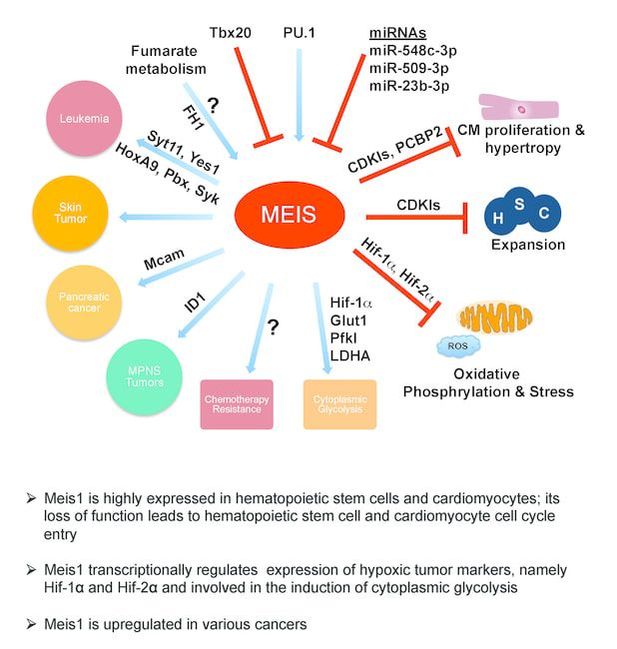 About MEIS and Development of MEIS inhibitors

Meis1 is a member of three-amino-acid loop extension (TALE) homeodomain transcription factors. Studies in the last decade have shown that Meis1 has crucial roles in cardiac regeneration, stem cell function, and tumorigenesis. We have recently demonstrated that knocking out of Meis1 in adult cardiomyocytes resulted in the induction of cardiomyocyte proliferation. This suggests that targeting of Meis1 might be utilized in the manipulation of cardiomyocyte cell cycle post cardiac injuries. In addition, hematopoietic stem cell (HSC) specific deletion of Meis1 leads to in vivo expansion of HSCs pool. Thus, targeting Meis1 may lead to not only cell cycle entry but also ex vivo and in vivo expansion of HSCs. On the other hand, Meis1 transcriptionally regulates the expression of hypoxic tumor markers, namely Hif-1α and Hif-2α. Hif-1α and Hif-2α are involved in the induction of cytoplasmic glycolysis and scavenging of reactive oxygen species (ROS), respectively. Studies highlight emerging roles of Meis1 towards development of new therapeutic approaches in the treatment of myocardial injuries, bone failure, and cancer (Reviewed in  Current drug targets).

By means of the in vitro luciferase studies conducted, the MEIS inhibitors which we have named as MEIS inhibitor-1 (MEISi-1) and MEIS inhibitor-2 (MEISi-2) were determined for the first time. These inhibitors (MEISi-1 and MEISi-2) inhibit MEIS luciferase reporter (Mahmoud &Kocabas et al, Nature, 2012) in a dose-dependent manner.

It was found that MEISi-1 and MEISi-2, which are among the developed MEIS inhibitors, reduce expression of p21, Hif-1alpha (Hif-1α), Hif-2alpha (Hif-2α) genes in the Meis1 pathway.

When all of the results are analyzed, it is observed that MEIS inhibitors trigger functional ex vivo proliferation of human HSCs.  When MEISi-1 and MEISi-2 were applied, CD34+ HSC number, CD133+ HSC number, CD34+CD133 HSC number and ALDHBr HSC number in human hematopoietic cell culture increased 2 times in comparison to DMSO control group.

It was demonstrated that in vivo application of MEISi-1 and MEISi-2 successfully increased HSC number in mouse bone marrow (LSKCD34low cells) and HSC number in the blood (LSKCD150+CD48- cells).

In short, it was observed that MEIS inhibitors realized functional ex vivo proliferation of mouse and human HSCs.

For inquiries of MEISi-1 and MEISi-2 please contact to PI. We have limited quantities at the moment, 1mg-10 mg packages are available,
​